A Look At 2018 Special Elections

Tuesday’s special election in Ohio’s 12th Congressional District drew plenty of hype and national attention.  Though Democrats speculated they would win this Republican-held district, Republican Troy Balderson edged out Democrat Danny O’Connor.  Republicans said this win was a sign the GOP would be fine in November.  Democrats argued that a GOP candidate again barely scraping by in a district that has been strong Republican proved Republicans would be drowned by a big Blue Wave this fall.  Neither is correct.

In the eleven special elections for U.S. Senate or U.S. House, Republicans had a partisan lean advantage in 10 – KS-4, MT-AL, GA-6, SC-5, UT-3, AL Sen, PA-18, AZ-8, TX-27, OH-12 – have been in Republican states and districts.  Yet only the Republican candidates in UT-3 and TX-27 came close to matching the past performance of the GOP candidates.  The Democratic candidates did better than their party’s past standard bearers in every other instance, but only flipped AL Sen and PA-18.

While Democrats cheer when candidates over-perform as they lose these Republican districts, there are no participation trophies for second place in politics.  Democrats must come to grips with the fact that a strong performance in a Republican-held district in a special election does not mean they will run the table in November.  Likewise, Republicans must heed the special elections results and realize many of their campaigns failed to shore up the GOP coalition, which includes a slug of independents and soft Rs and even an occasional swing Democrat. 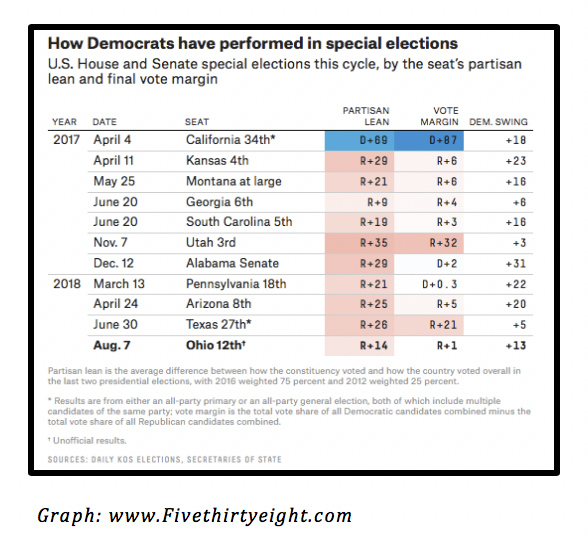