In recent elections, turnout has generally increased with each election.  These early enthusiasm numbers are signs that 2020 will likely continue that trend with turnout continuing to increase.  This suggests parties need to perfect their GOTV operations.  Republicans are on a good track to do so as shown by their win in the North Carolina special election this past Tuesday.  That said, base turnout cannot be either party’s exclusive focus.  As essential to victory, each party must also concentrate on persuading and turning out lukewarm party members and Independents who are enthusiastic about voting, but undecided or only weakly linked to their choice. 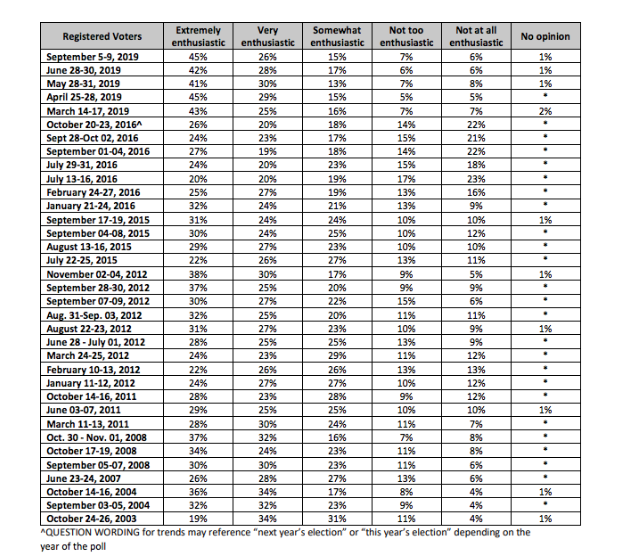 Polling News
Voters between 18-29 years old are extremely enthusiastic to vote in this election, according to the Fall 2020 Harvard Youth Poll.  ...
Read More
Share on:

Polling News
According to a new Gallup poll, 51% of Americans want the Senate to confirm federal judge Amy Coney Barrett to the Supreme Court, including 52% of Independents, 89% of Republicans, and 15% of Democrats.  ...
Read More
Share on:

Polling News
The Wall Street Journal highlighted the record-breaking rate at which voters are voting early. ...
Read More
Share on:

Polling News
Four years ago yesterday the release of the Hollywood Access tape was thought to have ended Donald Trump’s chances for the presidency. ...
Read More
Share on:
“
RT @DanaPerino: Sitting with my friend ⁦@KarlRove⁩ tonight https://t.co/a4ji0iQr2b
”