The 2022 Midterms are close and while Democrats and the Biden Administration try making their case to voters, recent polling from NBC News shows Republicans have a clear edge when it comes to key issues in this election. 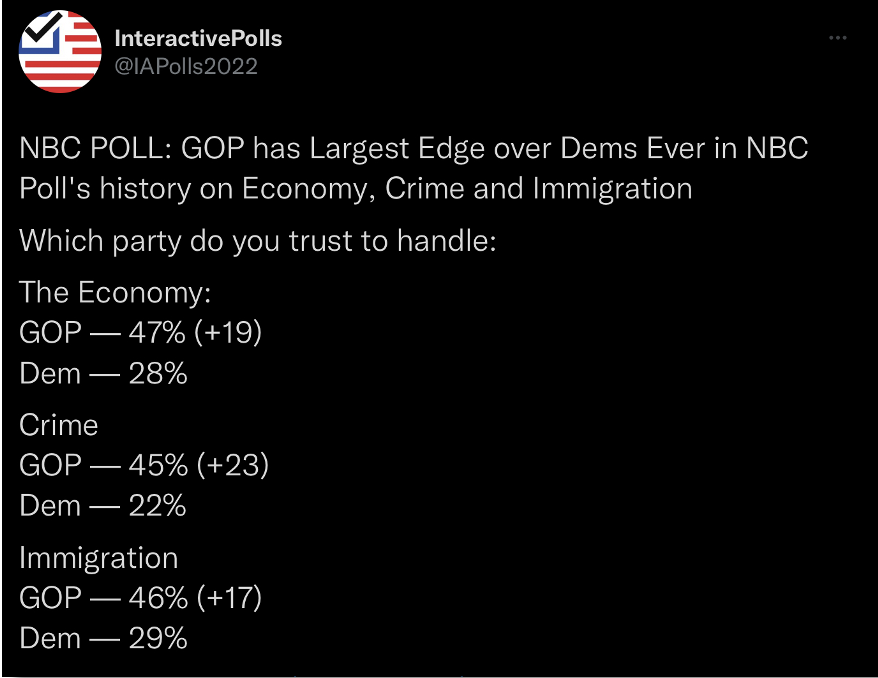 When asked which party would do a better job on dealing with the economy, 47% of voters said they trust Republicans more, while only 28% believe Democrats do the better job. This R+19 advantage on the issue is the biggest advantage for any party since the question was first polled in 1991. This comes as economic issues remain at the top of the list of voter priorities. In the wave years of 1994, 2010, and 2014, Republicans held the advantage on this issue, but not by double digits as they do this year.

On dealing with border security, 56% trust Republicans more than Democrats (20%), giving Republicans a 36-point advantage on the issue. The GOP’s edge has increased by nine points since the question was first asked last October. The messaging on the Biden-created crisis at the border has clearly broken through, and is connected to voter concerns on the issue of crime where voters trust Republicans over Democrats 45% to 22%, a R+23 advantage. Here too, the Republican advantage is the largest in the history of polling this question, going back to 1993.

The key to capturing swing voters this fall will be meeting them on the issues that matter most, engaging them with messages that deal with their concerns. Despite Democrats efforts to make this election about abortion and a perilous threat to Democracy, what’s on voters’ minds are still the economy and immigration, with concerns about crime rising to close among the top issues. Republicans are already trusted by the voters on these issues and should make them central in their messaging in the campaign’s seven+ weeks.