While less than 1% of the GOP National Convention delegates are at stake in the Iowa Caucuses on Feb. 1, the outcome will still have a large impact.  That makes the tendency of Iowa voters to change their minds in the days leading up to the caucuses so interesting.

The opinions of Iowa voters in both parties have changed dramatically in the weeks leading up to the election.  In 2008, the caucuses’ eventual GOP winner, former Arkansas governor Mike Huckabee, went from 21% in polls two months before the caucuses to 34.4%.  In 2012, former Pennsylvania senator Rick

Most voters remain undecided.  The Dec. 6 CNN/ORC poll found only 26% of GOP primary voters nationally are “Definitely Decided.”  Not only are Republican voters still considering their options, but also campaigns and outside groups have yet to spend most of what they will lay out on these contests.

Iowa remains fluid.  The next several weeks will be critical with at least three debates and as candidates ramp up their advertising and organizations efforts before Iowans head to their caucuses.  There will be a lot of jockeying for position among the Republican contenders. 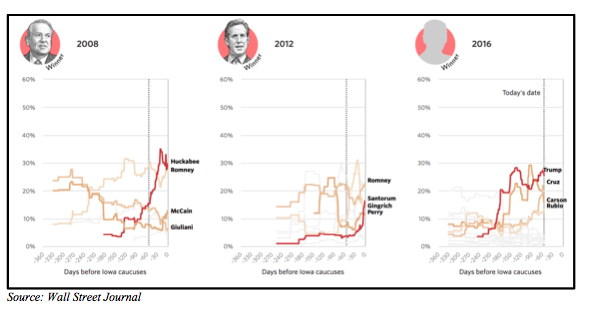