Headlines about the Administration’s announcement that ObamaCare premiums will rise dramatically in 2017 are not what the incumbent party wants to see two weeks before Election Day.  “ObamaCare Hikes Leave Dems Exposed,” “ObamaCare Fallout,” and “ObamaCare Premium Hikes Could Be Good News For Republicans” make for brutal coverage if you are a Democrat.

It is yet unclear whether this will move numbers in the presidential race, though Hillary Clinton wants to offer a government-run health care option as an answer.  In these swing states, she maintains a lead over Donald Trump in the RealClearPolitics.com average in all but three – Ohio, Iowa, and Missouri.  To attempt to close the gap, Mr. Trump is wise to finish his campaign with strong condemnations of ObamaCare while promoting his own vision for replacement as he did Wednesday.  Additionally, candidates running in close races down the ballot (NV, NH, FL, NC, MO, and PA Senate races, for example) now have fresh ammo about the real damage inflicted upon voters by the policies of Mrs. Clinton and her party and an opportunity to close with message that Republicans offer a better way with repeal of ObamaCare and replacement. 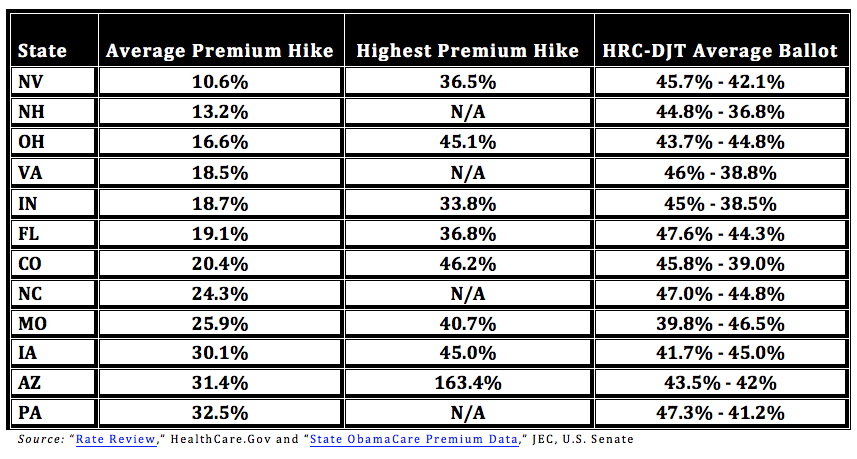