“We’re always stronger united,” Hillary Clinton posted on Twitter Tuesday night even before the Associated Press confirmed she had squeaked out a win in Kentucky, winning the Bluegrass State Democratic primary by barely 2,000 votes.

Now that Mrs. Clinton and Donald Trump are their party’s presumptive presidential nominees, they must unify their parties.  This will not be easy.  After Tuesday, Mr. Trump has earned 11,099,196 votes, while more Republican primary voters (14,671,970) have supported someone else.  Even in Oregon’s GOP primary, Trump took 66.8% while 33.2% was split between two candidates who have suspended their campaigns.

Mrs. Clinton has received 12,931,753 votes, while 9,856,602 voters chose another Democrat.  In the last eight nomination contests over the past five presidential elections, the eventual winner took the popular vote in all but two instances: in 2008, both Sen. John McCain and Sen. Barack Obama won their primaries with fewer popular votes than the rest of the fields they faced.  Mr. Obama went on to unite Democrats who supported someone else in the primary and even peeled off swing voters who may have voted in the Republican contest.

Mr. Trump must now work to conciliate the fourteen million Republicans who supported someone else, but considering Mr. Sanders says he is “in ‘til the last ballot is cast,” Mrs. Clinton also has her work cut out, too. 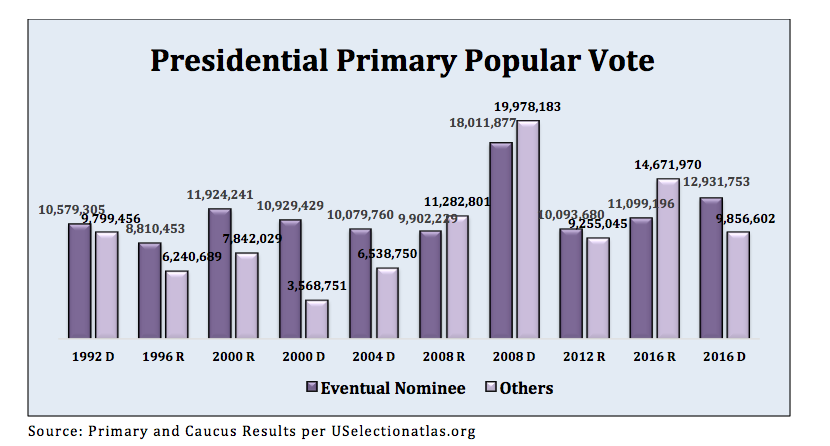