Out of Sight, Out of Mind

Over the last year, most of the attention has been on the Republican and Democratic presidential primary contests.  With over a dozen Republican candidates and a surprisingly close battle for the Democratic nomination, lame duck President Barack Obama was out of the spotlight.  Turns out that may have been the best place for him to be.

Being out of sight seems to have put Mr. Obama out of mind, allowing his overall job approval and disapproval ratings, as well as his ratings on key issues like the economy and foreign policy, to rise.  Today his Gallup job approval rating stands at 53% and his disapproval is 44%.  These are his best numbers since his second inauguration (when his ratings were 53% approve; 42% disapprove).  During the 2014 Midterm Elections, his approval numbers were upside-down, 39% approve; 56% disapprove.  Mr. Obama’s job approval rating on the economy (47% approve today) is up eight points from 41% during the 2014 Midterms, according to CBS News/New York Times.  His job approval on foreign policy – though still low – is up eight points today (standing at 42%) from the dismal 34% approval in Nov. 2014.

The rosy picture may not last, however.  As the General Election between Donald Trump and Hillary Clinton heats up over the next five months, Mr. Obama will be center stage, bathed in a brighter light.  Mrs. Clinton will be running for the third Obama term and voters may recall their old less generous feelings about his last two terms. 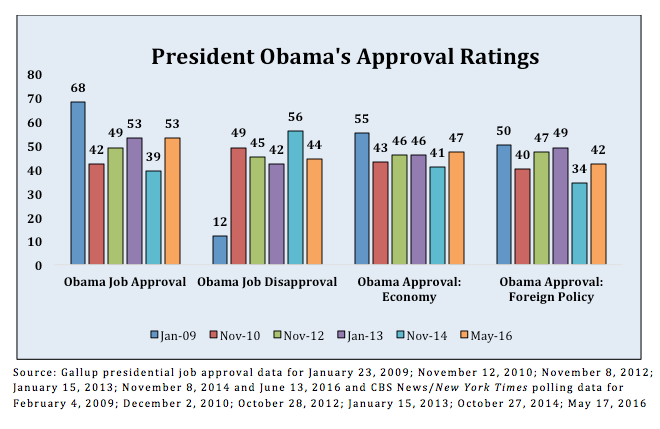