Last Thursday, President Barack Obama visited Elkhart, Indiana, one of the cities hit hardest during the Great Recession.  He went there to praise the country’s economic recovery during his two terms.  Two days later, he used his weekly address to applaud himself, explaining that the country is doing better because of “a series of smart decisions early in my presidency.”

He must have missed Friday’s weak Bureau of Labor Statistics’ jobs report that revealed only 38,000 jobs were created in May, 124,000 jobs short of what economists predicted.  Monthly job creation has not been this low since September 2010 when the economy lost 52,000 jobs and job creation has been slowing over the past year.  There was little to celebrate in May’s report.  Though the unemployment rate was 4.7%, the rates was low because Americans continue to stop looking for work and instead leave the labor force.  The participation rate has steadily declined over the course of Mr. Obama’s presidency, dropping from 65.7 in January 2009 to 62.6% in May 2016.  Jimmy Carter was president the last time labor force participation was this low.

With job numbers like these, it is no wonder only 28% of Americans are satisfied with the way things are going in the United States and 69% are dissatisfied, per the latest Gallup poll.  Hillary Clinton says she is the only one who can continue Mr. Obama’s policies.  With results like these, she may want to change her argument. 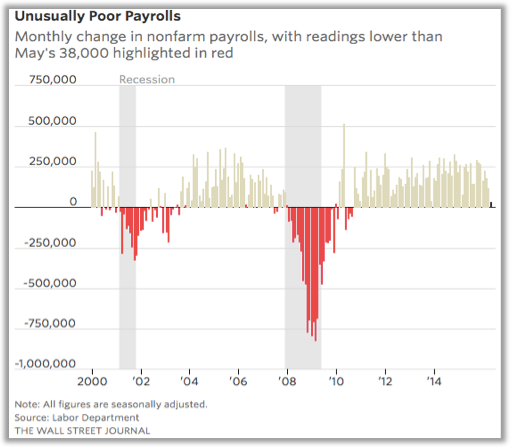