According to a Feb. 3 Gallup report, the number of Red states now outnumbers Blue states based on political party affiliation in 2015.  Twenty states are solid or lean Republican while 14 are solid or lean Democratic.  Gallup arrived at it state-by-state determinations by examining the partisan breakdown of all of its polling for the year.

Interestingly, states considered lean or solid Democrat in 2012 – Michigan, Minnesota, Ohio, and Pennsylvania – are now classified by Gallup as competitive.

Since Democrats are clustered in larger, more populous states, nationally they still out number Republicans with 43% of adults identifying as Democrats or lean Democrat, compared to 40% who identify or lean Republican.

Moreover, the Red states only account for 152 electoral votes, compared to 187 for the Blue states.  The Republican presidential nominee must win most competitive battleground states such as Florida, Ohio, North Carolina, Virginia, Colorado, Nevada, Iowa, and New Hampshire and the upper Midwest trio of Michigan, Wisconsin, and Minnesota to prevail. 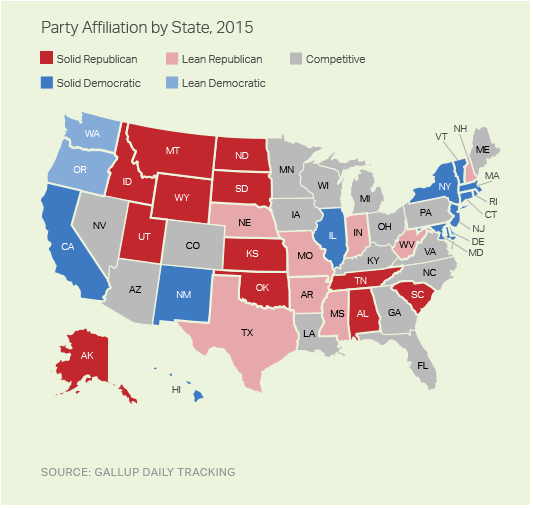