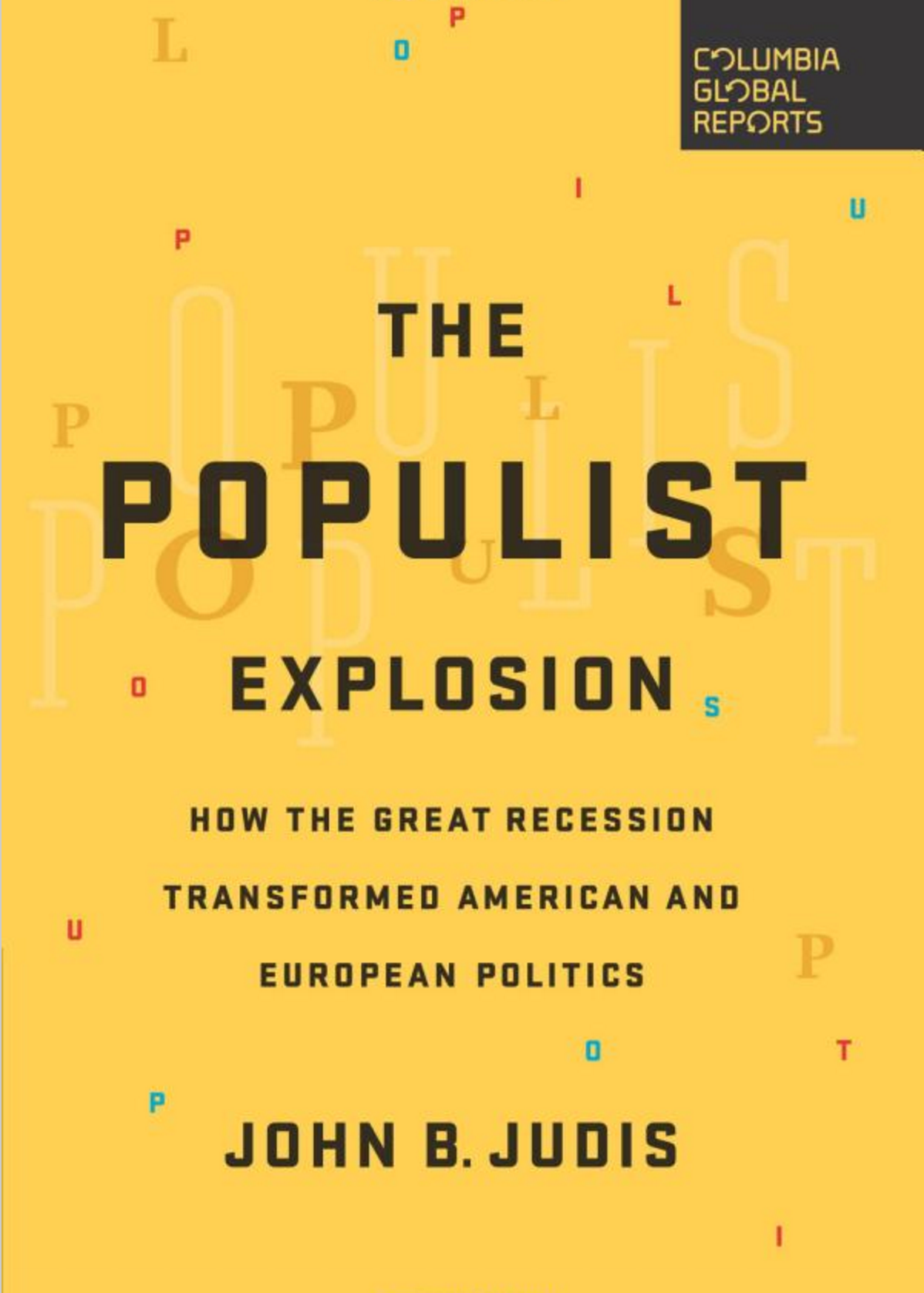 John B. Judis is the Democrats’ political analyst who was among the first on the left to suggest Democrats could regain the White House after George W. Bush by forging what he called the coalition of the ascendant – the young, non-whites, and college educated.

Editor-at-Large of “Talking Points Memo,” Judis was also among the first writers on the left to recognize that working class white Democrats were drifting away from their historical party roots in reaction to President Barack Obama’s policies and rhetoric.

Now Judis has written a small, short (182 page) and incisive guide to the growing presence of populist movements and candidates in Europe and America.

THE POPULIST EXPLOSION is worth reading, but I have a few quibbles with it, especially as Judis describes the roots of American populism and paints his picture of the 2016 election.

Judis largely ignores the cultural elements of the populism that fostered the creation of the People’s Party in 1892 and propelled William Jennings Bryan to the Democratic presidential nomination in 1896. This first major burst of American populism wasn’t simply an attack of the little man on “the plutocracy” and the “Money Power.” It was also a rear-guard action by agrarians of the South and Plains States against the changing nature of the American economy as the nation became increasingly industrialized and urban. Bryan captured this cultural antagonism by excoriating the increasing role of America’s cities and declaring the industrial and urban East Coast “the enemy’s country.”

Similarly, Judis makes a mistake by depicting the Great Recession as the principal generator of Populist sentiment in America today. In my opinion, this overstates the role of the financial crash and underplays the reaction to President Obama and his policies. It was not principally those who lost their homes in 2008 who fueled the Tea Party and drove Donald J. Trump’s victory last year: it was the mortgage holders who made their payments and the small businesspeople and workers who felt Mr. Obama was spending and regulating the country into ruin.

First Mr. Obama’s stimulus bill and then his health care bill ignited an enormous reaction among middle class Americans. They felt lied to about the promises the Obama Administration made about both pieces of legislation. And they felt strongly Mr. Obama was sending the country down the wrong track.

Many on the left and even some commentators on the right downplay or even ignore the role Mr. Obama and his policies played in forging the outcome of the 2016 presidential race as THE POPULIST EXPLOSION does.

Judis is on stronger ground in his description of today’s rise of European populism. Some of that springs from a reaction to the influence of rising immigration, especially in its demands on social services and the failure of immigrant communities to assimilate. But Judis also provides an interesting look inside the sources of leftwing populism that arises as a reaction to the constraints placed by the European Union’s power over individual national economies and policy-making powers.

Absent the European single currency, nations like Greece would have greater discretion and power over their own economies. But with the Euro, more economically responsible nations like Germany, France, and northern European nations are unwilling to allow the irresponsible budget policies of nations like Greece, Italy and Spain to diminish the value of their shared currencies or force too large a transfer of resources from the more economically conservative nations to the more spendthrift ones.

Consider the conflict that would arise if, say, California said Texas must send or loan us vast sums of money so we can keep building high speed rail to nowhere, paying state employees lavish salaries and pensions, and offering overly generous welfare benefits; and Texas said, "no, you’ve got to cut your budget, lay off people, reduce government salaries and slash welfare benefits and your legislature and governor cannot refuse". Substitute Greece for California and Germany for Texas and locate the decision-making power in mostly bureaucratic bodies that Greece cannot influence much and you see the weakness of Europe’s attempt at federalism.

THE POPULIST EXPLOSION is a provocative look at what’s happening in America and Europe. In my opinion, it’s better on the latter than the former because it glosses over the damage Mr. Obama did to his party and the political forces his policies and actions unleashed. Some of these pressures were populist; even more important were the more traditional conservative reactions to his policies that nonetheless helped put a populist in the Oval Office.