Churchill's Trial: Winston Churchill and the Salvation of Free Government 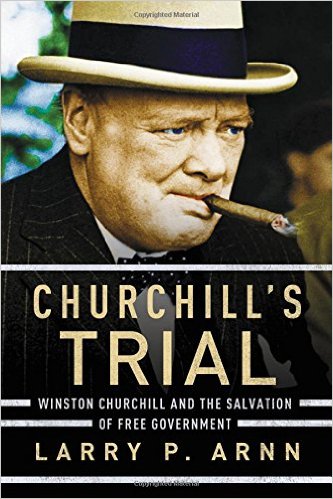 For most of the 20th century’s first half and beyond, Winston Churchill was a prominent figure on the world stage, reaching the pinnacle in his decisive role in confronting and defeating the Nazi menace. Now Larry Arnn has written a lively and richly-informed book about Winston Churchill’s public life as represented in the three great trials in which he participated: the fight against Hitler and Nazism, the struggle with Soviet Communism, and Britain’s fall into socialism. I say richly-informed without fear of contradiction. Long before Arnn became the exemplary president of Hillsdale College in Michigan, he worked alongside Sir Martin Gilbert, Churchill’s official biographer (and even met his future wife). There are few, if any, people alive who have dwelt as deeply or as long in the Churchill archives than Larry Arnn. This deep knowledge shows on every page of this wonderful exploration of Churchill’s fundamental views about statecraft, the proper role of government, and the threats to liberty from utopian ideologies that believe Man can be remade. You’ll see Churchill from a different vantage point in this volume, a political practitioner operating at the highest levels guided by that part of him that is a political philosopher. If you like reading about Churchill or have a friend who does, this is a grand book full of new insights and fresh perspective. It’s a joy to traipse through the Great Man’s thoughts and writings by someone as conversant with them as Arnn, who is himself a beautiful writer. Buy this book and pack it for vacation or the beach.
Share on
Related Books