Going Red: The Two Million Voters Who Will Elect The Next President - And How Conservatives Can Win Them 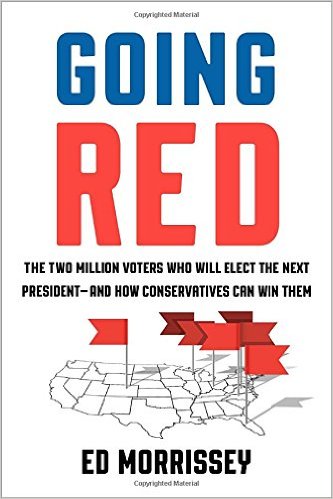 Blogger and radio host Ed Morrissey has written a slim, powerful volume about what Republicans must do to win the 2016 presidential election. He examines trends in seven counties in battleground states that President George W. Bush won in 2004, but which were lost by Senator John McCain in 2008 and Governor Mitt Romney in 2012. Morrissey suggests the key to winning these battleground counties is in these battleground states with over 90 electoral votes. Conservatives must do better with Hispanics, African-Americans, and younger voters: by winning votes in these Democratic voter groups, Republicans pick up two votes, adding one to the GOP column while taking one from the Democratic column. Republicans must also do better in engaging with these and other target voters: the Democrats didn’t beat the GOP in the volume of contacts they made, but they did beat Republicans in the quality of their contacts. They duplicated the GOP’s 2004 ground-game and, using newly available social media tools, deployed an army of volunteers who kept in touch with their target voters constantly and effectively. Morrissey doesn’t advocate a conservative presidential candidate surrender their principles, but start by showing up in the neighborhoods and communities of swing voters and more effectively communicate their message. GOING RED is a quick, short read packed with smart insights and well worth reading if you’re a political junkie who wants a Republican in the White House come next January. (Full disclosure: my former Chief of Staff, Kristin Davison – a/k/a “Data Girl” – helped Morrissey identify the battleground counties he covers in his book)
Share on
Related Books