Let the People Rule: Theodore Roosevelt and the Birth of the Presidential Primary 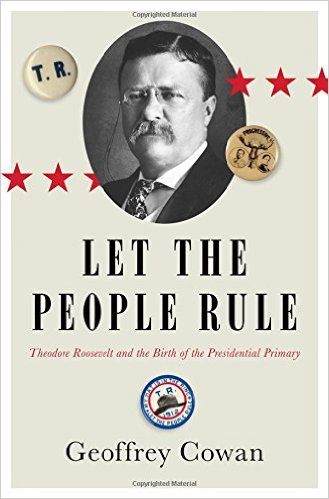 A veteran of the tumultuous 1968 Democratic Convention in Chicago and now a USC Professor and President of The Annenberg Foundation Trust at Sunnylands, Cowan has written a lively account of Theodore Roosevelt’s effort to have the Republican Party oust his one-time friend, President William Howard Taft, and install himself as its nominee for the White House in 1912. If you are a Theodore Roosevelt fan, be prepared for unpleasant surprises as he maneuvers to become the GOP standard bearer over the dead-political body of his protégé. Well researched and written with the gusto of someone who knows and loves politics, it’s a great read. Because the book focuses on Theodore Roosevelt and William Taft and ends at the Progressive Party Convention, pick up Lewis L. Gould’s Four Hats in the Ring: The 1912 Election and the Birth of Modern American Politics, before or after consuming Cowan’s excellent volume.
Share on
Related Books