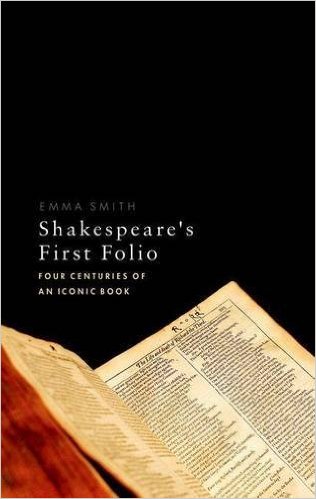 This being the 400th anniversary of William Shakespeare’s death, my reading list this year has had several books on the Bard. Earlier this spring, I dipped into Emma Smith’s catalog prepared for a Bodleian Library exhibit on the First Folio, THE MAKING OF SHAKESPEARE’S FIRST FOLIO. That book was written more for a scholarly audience and constrained by the need to explore the materials in the exhibit. Fortunately, Ms. Smith, an Oxford Professor, has drawn on her vast knowledge of the subject for another volume, this one geared to the more general audience of Shakespeare fans who want to understand the impact of the publication in 1623 of the famed First Folio, a collection of his plays and poems. Ms. Smith examines the history of the First Folio, concerned with “how that very book has moved through time, space, and context.” She considers it from five perspectives. The first is that of ownership. She traces how this seminal book inspired generations of collectors to pursue this valuable treasure over four hundreds years, how copies spread across the globe, and moved from private reads to institutional, public, and corporate hands. Ms. Smith then explores how those who possessed the First Folio left their personal marks in the pages of their copies, annotating, commenting, marking-up, and adding to the text. This is a particularly interesting chapter for some of these notes have informed out understanding of Shakespeare’s work and reflect how it has been viewed over time. The “intense scholarly engagement” with Shakespeare’s work is Ms. Smith’s third chapter. How did scholars deal with the differences between the plays as contained in the First Folio and other versions, available in earlier printed copies of the plays or in subsequent editions, informed by other sources and disputes about what really are the Bard’s authentic and true words. Ms. Smith then delves into the impact of the First Folio on the theater and the evolving presentation of Shakespeare’s plays over time. She pays particular attention to those copies of the First Folio owned – and marked up by – actors, managers, and directors. Finally, Ms. Smith deals with how the First Folio affected scholars, actors, editors, publishers, and Shakespeare aficionados who sought to “perfect” the playwright’s texts over time. For there is no “official” version of each play, reviewed and approved by Shakespeare himself. The First Folio was compiled by friends and fellow actors and published eight years after Shakespeare died. They drew on whatever scripts they could put their hands on: some of them printed as individual plays and sold to the public, some of them versions of the original scripts that actors and stage managers had obtained in the years after the play was originally staged, and perhaps even some original scripts themselves. The book is a little stiff at points and occasionally veers off into brief moments of references to what must be battles over what it politically correct in Shakespeare studies in specific and literature studies in general, but this is a good read for anyone who wants a broad, richly informed study of the book that saved Shakespeare and his works for the enjoyment, education, and edification of the world.
Share on
Related Books