The American War: A History of the Civil War Era 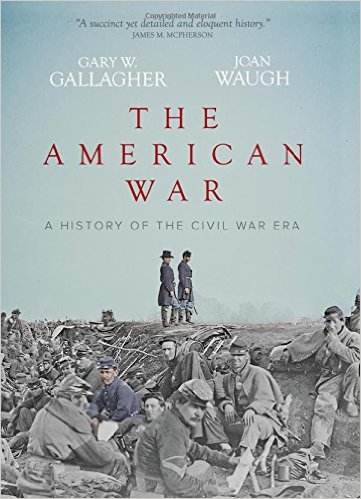 Two of the nation’s leading Civil War historians have joined to write a concise and deeply informed survey of the conflict that cost 620,000 lives while ending slavery and changing the country fundamentally. This slim volume covers the war’s major events, leaders and aftermath as it examines the military, political, cultural and economic course of the conflict. There’s less on the battles and more on the major currents affecting the homelands, North and South, including chapters on how the war affected women and blacks and how they influenced the course of the struggle. As a result, Gallagher and Waugh provide keen insights into how ordinary people on both sides of the Mason-Dixon line were reacting to events. Full disclosure: I’ve toured several battlefields with Gallagher, the John Nau III Professor in the History of the American Civil War at the University of Virginia. Few historians can come close to matching his enormous knowledge about the clashes of Union and Confederate armies. And Waugh, a UCLA historian, has also written extensively on the Civil War, especially its impact on culture, as well as a terrific biography of Grant. What is interesting about THE AMERICAN WAR is that Gallagher and Waugh have combined to produce that most difficult of works: an overview that gives readers who have delved long and deep into the literature of the Civil War a chance to step back and look at the whole scope of the conflict. This creates interesting new avenues that Civil War buffs will hurry to explore, aided by a terrific addendum to the book with suggestions for additional reading, organized by subject. This book would make a tremendous introduction to the Civil War for college and high school history classes.
Share on
Related Books