The First Modern Clash Over Federal Power: Wilson Versus Hughes in the Presidential Election of 1916 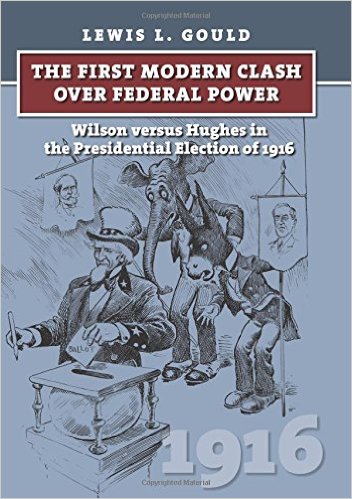 One of the preeminent historians of the Progressive Era and Gilded Age has written a slim, lively volume about Woodrow Wilson’s reelection bid in 1916, an election that often gets overlooked. Blaming their defeat in 1912 on the bitter split between Theodore Roosevelt and his protégé and close friend, William Howard Taft, Republicans entered the 1916 contest in high hopes. Party leaders believed the GOP’s natural majority would reassert itself as Republicans united behind a reform candidate whom pragmatic conservative party bosses felt they could work with. But Woodrow Wilson’s success in pursuing the progressive agenda and the growing war in Europe fundamentally changed the electoral landscape, a fact Republicans were slow to accept. Then there was the GOP standard-bearer, Supreme Court Justice and former New York governor Charles Evans Hughes. He turned out to be a less-than-effective candidate and for once, the Democratic campaign apparatus was far superior to the GOP’s. Roosevelt also played an unhelpful role, chasing around the country to give bellicose speeches about the European conflict that made the Republicans seem eager to plunge into the war on the side of Britain and France. This unsettled not only Midwestern German Republicans, but also isolationists and others bent upon keeping America at peace behind the Atlantic and Pacific Oceans. Gould also makes the case that this is the election in which the two parties began moving to swap ideological positions. Before 1916, the GOP was the party of a more robust federal government, financed by high tariffs, while the Democratic Party was the small government, state’s prerogatives, low tax party. Partly in reaction to what some Republicans saw as policy overreaches, the GOP criticized Wilson for advancing federal power too far. In the end, “He Kept Us Out Of War” and the establishment of an eight-hour workday for railroad workers, coupled with a string of tactical mistakes by the Republicans and a less-than-satisfactory performance by the Republican candidate gave Wilson a second term. But like many second terms, it was an unhappy one that restored the GOP’s strength in Congress and laid the foundation for Republican dominance in the 1920 presidential election and the dozen years that followed. This is a valuable addition to the University of Kansas Press series on American presidential elections. If you’re not yet addicted to this wonderful collection, check it out at https://kuecprd.ku.edu/~upress/cgi-bin/series/american-presidential-elections.html. Start with Gould’s book on 1916 election and another volume on a contest that catches your fancy. Don’t blame me if you get hooked! Worse things have happened to you than being introduced to hours of fantastic political history.
Share on
Related Books