The Fractured Republic: Renewing America’s Social Contract in the Age of Individualism 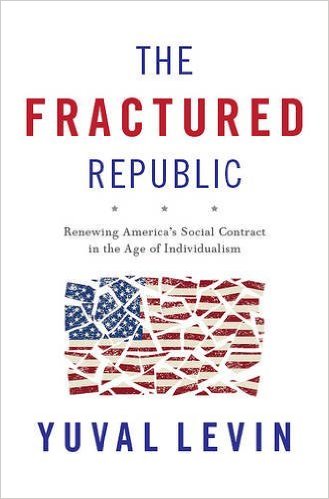 A former Bush White House colleague, Yuval Levin, has written an important book for conservatives. His provocative thesis is that conservatives and liberals alike are wedded to a philosophical nostalgia that is debilitating for their respective movements and for the country. Liberals are nostalgic for the 1950s – a time where big government, big labor and big business worked in close cooperation – and the heady idealism of the mid-1960s Great Society, where every problem was thought solvable if only a new centralized bureaucracy in Washington could be endowed with enough power and money to get the job done. Conservatives are also nostalgic for the 1950s, but instead for the Ozzie and Harriet quality of stable families, strong communities, and broad horizons of prosperity. They also pine for the 1980s when a strong leader restored confidence, national pride, and prosperity. None of these eras was exactly as we think it was, Levin argues, and the circumstances that allowed them cannot be replicated. But the yearnings for the restoration of these situations keeps both liberals and conservatives locked in a fruitless search for the unattainable. Levin calls on conservatives to examine our principles and apply them to the new circumstances in which America finds itself, taking timeless ideals and fashioning 21st century solutions for 21st century challenges. Levin sketches such a new paradigm but his book is concerned less with describing such an agenda than in confronting conservatives (and liberals) with developing them. This may not be your typical beach book, but put it on your summer reading list if you’re concerned about America’s future and that of the conservative movement.
Share on
Related Books