The Intimidation Game: How the Left Is Silencing Free Speech 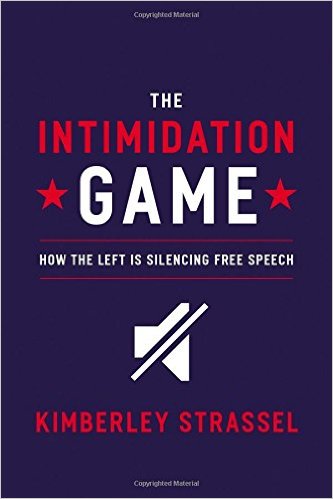 Kim Strassel writes a heck of a great column – “Potomac Watch” – every Friday in the Wall Street Journal on whose editorial board she sits. Now this master of the short essay has written her first book and it’s a dandy. THE INTIMIDATION GAME is a brilliant exposé of how the Left is using the vast regulatory and prosecutorial powers of government to attack the First Amendment free speech rights of conservatives in order to silence and marginalize them. Rather than achieving political power at the ballot box, the Left is trying to forever silence the Right by intimidation, regulation, and if need be, jail. It’s an alarming tale, told by a wonderful writer who draws on exhaustive research and her enormous talents as a journalist. They are all here – Barack Obama, Lois Lerner, John Koskinen, the Wisconsin prosecutors who tried to get payback for Scott Walker’s recall election victory. But Strassel also introduces a larger gang of villains of left-wing lawyers and operatives like Bob Bauer, Obama’s campaign lawyer, who have discarded the normal tools of campaigns and legislation to wage a vicious war on the rights of free expression and free association of their conservative political opponents. When you finish this book’s last page, you will have a new appreciation for the dangers facing our country, perils brought on by a new type of political thug, often backed by the power of the state and unburdened by any deep commitment to the Constitution and the Bill of Rights. THE INTIMIDATION GAME will make you even concerned for American democracy.
Share on
Related Books