The Making of Shakespeare's First Folio 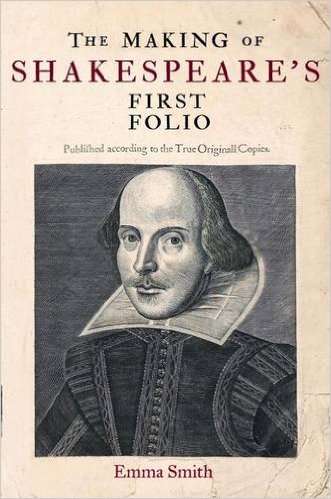 Since this year (actually April 23) is the 400th anniversary of William Shakespeare, expect more than a few books on the Bard of Stratford-upon-Avon in the next few book reviews. Emma Smith is an Oxford professor who has written about the famed “First Folio,” the effort of two of Shakespeare’s friends and fellow actors to collect and publish the works of the man now considered the world’s greatest dramatist. The world owes an enormous debt to John Heminge and Henry Condell and their printers, William and Issac Jaggard, and their investors, led by bookseller Edward Blount. Without their efforts, we would not know the words of Julius Caesar, Macbeth or The Tempest and at least fifteen other Shakespeare plays. Smith describes the collection, preparation, printing, and distribution of the “First Folio” and its significance in securing Shakespeare’s reputation and influence over centuries of English – and now global – literature. While written by an academic for an academic audience, THE MAKING OF SHAKESPEARE’S FIRST FOLIO is easily accessible to the lay reader, though the good professor has this habit of sticking notes in the text saying an element of the subject at hand will be dealt with later in the book. Still, it’s an informative read that makes clear that the then-limited market for books, expensive and time-consuming to print, almost robbed Western Civilization of one of its great treasures, the collected works of William Shakespeare.
Share on
Related Books