The Men Who United The States 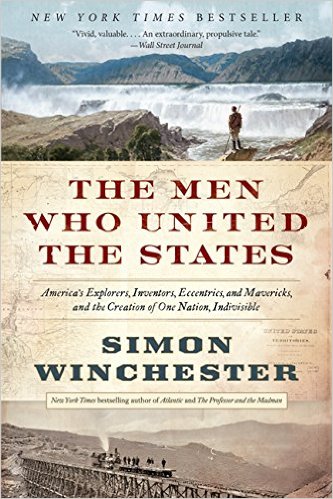 Simon Winchester has written some smashingly good books, among them THE PROFESSOR AND THE MADMAN, THE MAP THAT CHANGED THE WORLD, A CRACK AT THE EDGE OF THE WORLD and KRAKATOA. Now this British expatriate has written something of a love letter to the country that made him an American by recently granted him citizenship. THE MEN WHO UNITED THE STATES examines the (mainly) men who tied our nation together. Most Americans know some of Winchester’s subjects – Lewis & Clark and Alexander Graham Bell, for example. However, many figures that populate this book’s are far less famous though also consequential to the creation of the country in which we live. Among these are Clarence King and Calraith Perry Rodgers: King was a pioneering geologist with a secret life and Rodgers the first man to fly across America, though his tale will leave you wondering how he survived and why he stuck at it. Winchester uses the Chinese description of the world’s five essential elements – wood, earth, water, fire and metal – as an organizing device to explain how the actions of disparate men at different times and in their own ways connected the American people across a vast continent, making possible their westward expansion, their progress and the nation’s prosperity. With the 4th of July coming, this is one bit of summer reading that will leave you feeling intensely patriotic and grateful for the giants – known and previously unknown to you – who helped make this nation what it is.
Share on
Related Books