For months leading up to and after the anniversary of the Jan. 6 Capitol riot, Democratic Senators and candidates have been telling Americans that their right to vote is in danger and a Senate procedure instituted to encourage deliberation and consensus—known as the filibuster—is an existential threat to democracy. What’s been the result of the messaging? New polling for the Senate Opportunity Fund shows support for the filibuster has increased since Democrats began messaging on it last year. 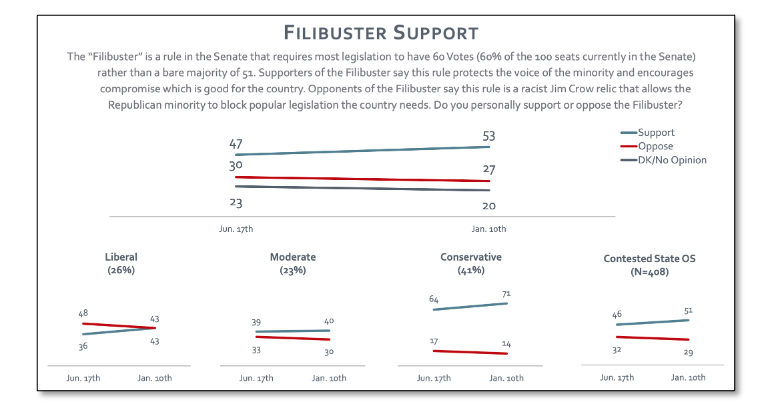 Voters were asked which of two statements they agree with more. One statement framed the filibuster as a protection that ensures reasonable legislation is passed and that approval of the Bipartisan Infrastructure Package earlier this year shows that it works. The other statement framed the filibuster as a relic that’s “unfairly preventing Democrats from passing major priorities and needs to be eliminated in order to transform our country now that Democrats are in the majority.”  When asked which statement they agreed with more, 50% said the filibuster is an effective means of protection, while only 31% believe it’s a relic. 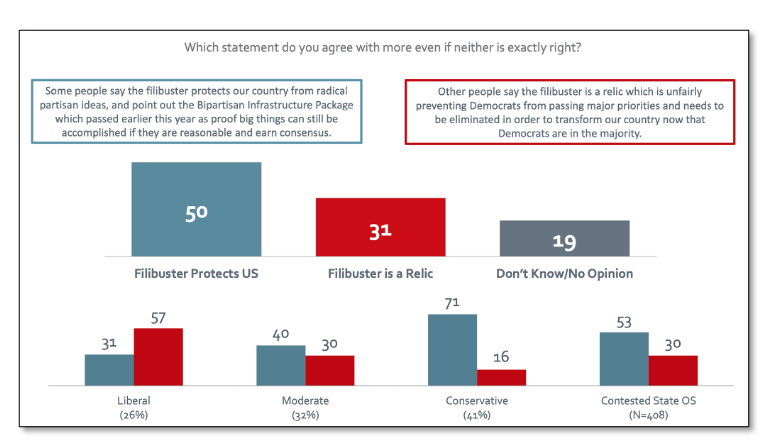 Democrats see the abolition of the filibuster as a key issue that will define the 2022 midterm elections and provide them a path to a continued dominance of Washington. However, the American public doesn’t agree. Democratic messaging on the filibuster has only done damage to their cause and strengthened the Republicans to make the case that a GOP victory in the midterm is the best way to provide a check and balance on the Biden Administration and the Democratic Party’s ascendant left.