Crime Surges as Issue Among Voters

A new Morning Consult/Politico poll shows that in the final month of the 2022 Midterm Election, crime is surging as a top issue among Americans. 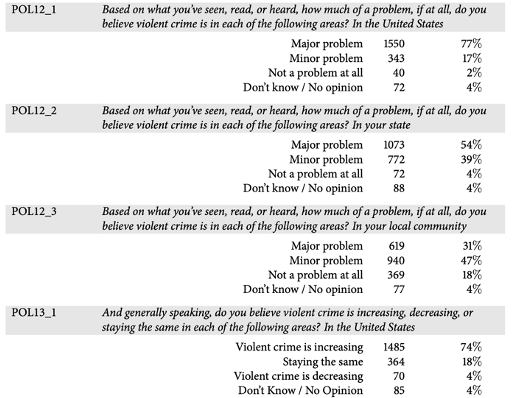 WHY IT MATTERS: Democrats who supported or remained silent as the “Defund the Police” movement played a big role in the 2020 elections and then didn’t respond violent crime rose are not at risk as Americans grow ever more concerned about the safety of their communities.

The poll measured the extent to which voters now view crime as a major issue, the levels at which Americans believe their government bears responsibility, and what they believe are the driving factors behind violent crime. By the numbers:

In discussing the driving factors behind violent crime, 50% of Americans cited the defunding of police departments as a major driver. The “Defund the Police” movement has been most prevalent in big cities, where the Justice Department’s 2021 Crime Report showed violent crime increased by 29% from 2020 to 2021. Lack of adequate funding for mental health programs was another major driver, with 53% of voters citing it as a reason for the increase in violent crime.

The bottom line: 44% of Americans trust Republicans more to tackle the issue of crime in Congress while 37% trust Democrats.  Continuing to press this issue and emphasizing the inadequacy of Democrats will help expand the GOP’s advantage on law and order in this election.