Recent polling from USA Today/Suffolk University shows a red wave may be imminent as Democrats bleed with undecided voters. 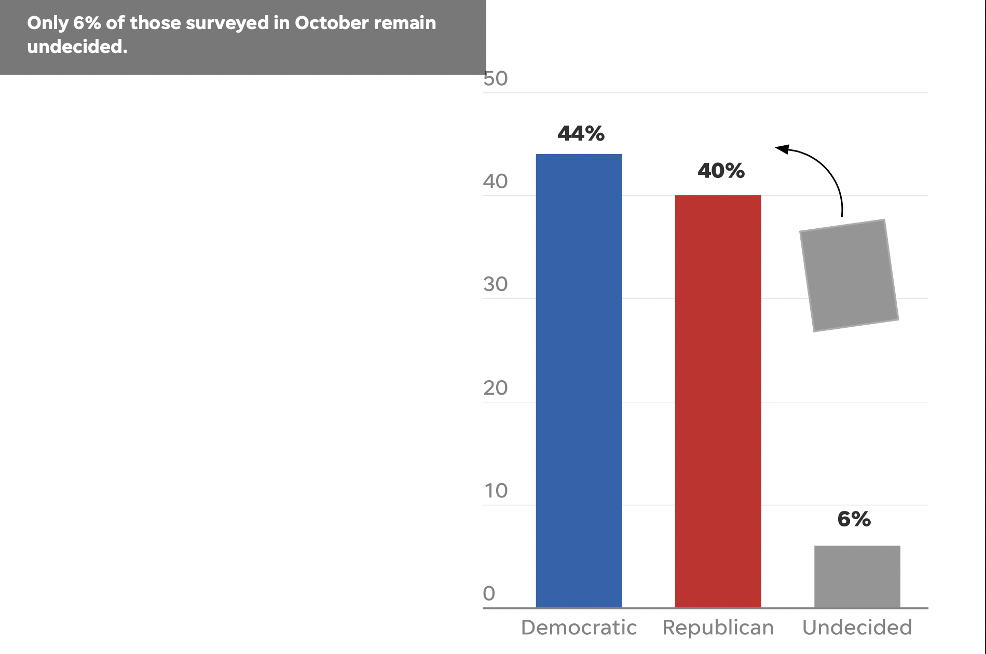 WHY IT MATTERS: Going into the final week of the 2022 midterm election, Republicans stand to make major gains as undecided/swing voters are trending toward the GOP in large numbers. This is a major harbinger of a good night for Republicans.

In July, 16% of voters were undecided in this election. 6% remain undecided, but Republicans now lead the Congressional generic ballot 49% to 44%. The change comes with a shift in how nonwhite voters will be voting, showing gains made among Hispanic and African American voters by the GOP.

It’s The Economy: The major driver for the shift is found in who is speaking to the issues. 66% of voters believe the country is on the wrong track today and the top issue among voters (at 37%) is inflation or the economy. That’s bad news for Democrats, who put most of their messaging eggs into the abortion basket.

A Possible Referendum: Among those surveyed, 43% said they agreed with the statement “I want my vote to change the direction President Biden is leading the nation.” 28% stated they support the President, and 25% said their vote doesn’t have much to do with the President and his policies.

The Bottom Line: Republicans need only one seat to take back the Senate and five seats to flip the House of Representatives. In this final weekend of messaging, their best bet is to stay the course and continue driving the message that Democrats are responsible for inflation and the poor condition of the economy. Messaging on kitchen table issues that matter the most to voters is likely to win the majority for the GOP.