With 2022 coming to a close, the 2024 presidential cycle is getting underway with former President Trump declaring his candidacy and President Biden indicating he might run. Still, polling from Marist shows that voters in both parties might be looking to make a change in 2024. 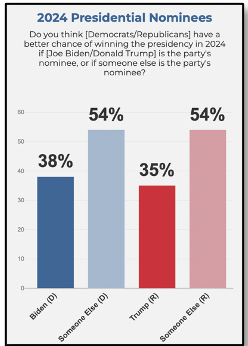 Why It Matters: Democrats are hesitant to support Biden and Republicans reluctant to back Trump with a majority of party members and independents who lean to that party believing neither candidate would be best positioned to win if they’re the candidate. By the numbers:

Direction, Performance, & Priorities: Over two-thirds of Americans say the country is headed in the wrong direction. This is unchanged from the last Marist poll and other polls in October. Mr. Biden’s job approval rating sits at 42%, but his unfavourability has reached 54%. Only 18% strongly approve of his performance. As the new (divided) Congress prepares to take office, inflation is still top-of-mind for Americans, with 31% saying it should be the top priority. Preserving democracy comes in second at 14%, followed by immigration at 12%, and abortion and health care each at 10%.

Bottom Line: Americans are looking for change in Washington. While the midterms did not bring a large wave in either direction, it was not a mandate for the Biden Administration or its agenda. A majority of voters believe a new path forward is the best. Republicans should not simply view their new House majority as a means of obstruction against the Biden White House.  Instead, the GOP should see it as an opportunity to deliver policies that impact the issues Americans care the most about. Such an approach will make the GOP’s path to victory in 2024 far easier.