Who Is Best Able To Handle Problems?

After President Joe Biden’s first year and nearly 14 months of Democratic control of Congress, recent polling of registered voters conducted for the Wall Street Journal by Impact Research, and Fabrizio, Lee & Associates shows Americans believe Republicans are better able to handle many of the most important issues facing the country. Republican gains on many of the issues have accelerated since Nov. 2021. 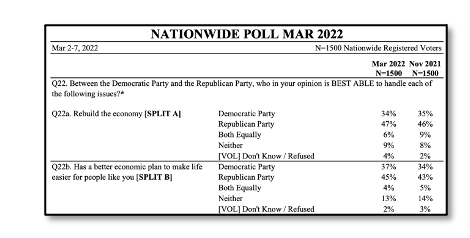 When it comes to rebuilding the economy, Americans favor Republicans with 47%, to 34% for Democrats, higher for Republicans and lower for Democrats since Nov. 2021. Republicans also saw a two-point gain on the question of which party has a better economic plan to make life easier for people like them. On getting inflation under control, Republicans are favored 47% to Democrats’ 30%.

Another very significant change: when asked which party is best able to look out for middle class families, Republicans gained six-points with voters to take the lead, rising from 35% to 41%, while Democrats remained at 40%. Many issues likely play into this change, ranging from the economy to border security and from parental rights to public safety. 40% of voters say Republicans are also better able to keep children in schools, while only 32% see Democrats as best able to. In terms of improving education overall, Republicans made significant gains over the last four months, coming from a net -9 points (29%-38%) to a net -5 point gap. Republicans making major gains on kitchen table issues like these will present a serious challenge to Democrats in the 2022 midterms.

Republican gains around the country last year show that the GOP is on the right track by pointing to the failed policies of the Biden Administration and Democrats in Congress. Communicating alternative policies will draw even more support from voters who are once again open to backing the GOP.  This would ensure an even bigger Republican victory in the Nov. elections, just under eight months away.