Former President Raises Stakes With His Endorsements: There’s no doubt that former President Donald Trump remains the dominant figure in the GOP. A recent study from FiveThirtyEight shows that moving into the 2022 midterm elections, the former president has given his “Complete and Total Endorsements” to candidates across America, at all levels, and even earlier and with more frequency than in the 2020 election cycle. 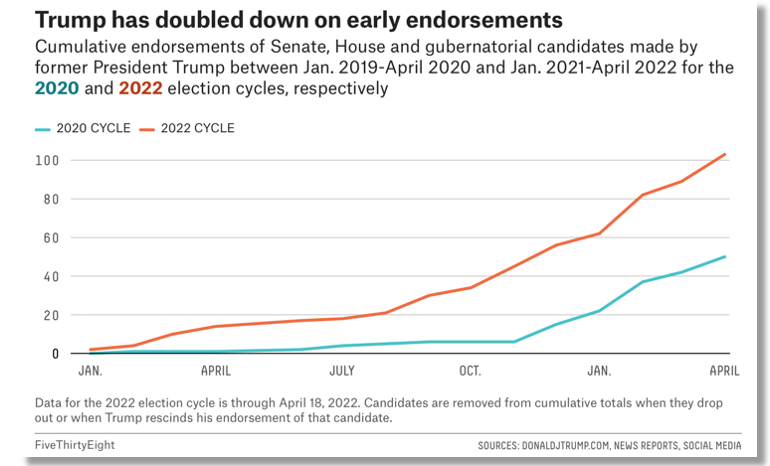 By endorsing earlier and more often, the former president is raising the stakes for his status as the party’s dominant figure. Understanding that, he’s protecting himself by making many endorsements of incumbent Republicans in heavily GOP districts who face no real threat in the primary or general. Some endorsees, in fact, face no opposition in the primaries and some, no Democratic opponent! Most safe endorsements have gone to U.S. Senators, Congressmen and state officials who stood with him during his impeachment trials and agree with him that the 2020 election was stolen.  About 70% of endorsed candidates fit this description while 30% don’t.  The process seems ad hoc: some candidates didn’t seek Mr. Trump’s endorsement and learned about it when Mar-A-Lago issued a statement.

Some endorsements have raised eyebrows. For example, in Ohio, every county Republican chair signed a letter expressing disappointment in his endorsement of author J.D. Vance. In Pennsylvania, the former president faced backlash from many conservative influencers over his support for Dr. Mehmet Oz.  The RealClearPolitics polling average shows incumbent Georgia Gov. Brian Kemp leads Trump-backed challenger and former Sen. David Perdue by roughly 12 points. The Trump endorsement has not guaranteed victory, as Rep. Mo Brooks found out in his bid for the Senate from Alabama.

There’s no doubt Mr. Trump is still a force. In May, we’ll get a sense of of how much he is.