Inflation remains a top issue in the Midterm Elections as campaigns enter the post-Labor Day sprint. New data from the Bureau of Labor Statistics shows the geography of Biden’s inflation may make winning the U.S. Senate more difficult for Democrats. The change in the Consumer Price Index from August of 2021 to August of 2022 shows the national average is a C.P.I. increase of 8.3%; it also revealed that several metropolitan areas in targeted 2022 states face inflation on a more profound level than the national average. 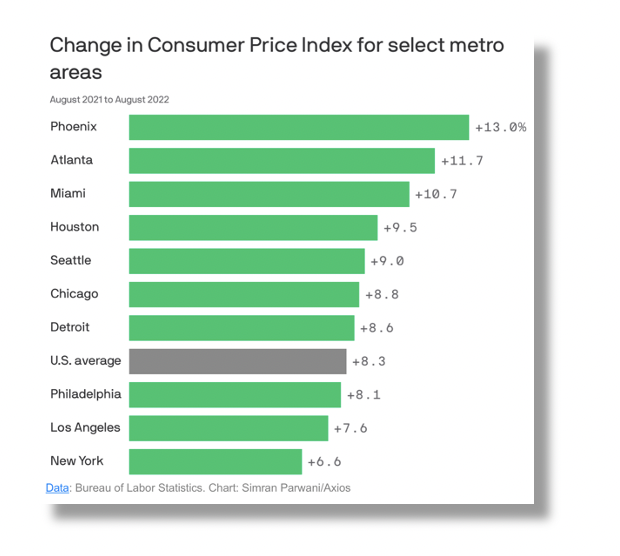 At the top of the list is the Phoenix area in the battleground state of Arizona. Republican Blake Masters is challenging Democratic incumbent Mark Kelly and the Phoenix metro comprises roughly two-thirds of the state’s population. Phoenix’s C.P.I. has risen by 13% over the last 12 months, putting the area almost 5% over the national average. Arizona is now a 34.52% Republican/33.72% non-partisan (other)/30.97% Democrat split state. Data shows inflationary and economic issues are a vote driver among the non-partisan voters that will, in part, decide the balance of power in the Senate.

Second is the Atlanta metro, where the C.P.I. has gone up by 11.7%, sitting 3.4% over the national average. In Georgia, Republican Herschel Walker is taking on Democratic incumbent Raphael Warnock. Metropolitan Atlanta is home to about 6 in 10 Georgian voters. The key swing voters there will likely be very receptive to clear communication of the lack of action taken on inflation.

Also noteworthy is the C.P.I. in the Philadelphia, Pennsylvania, which increased by 8.1% — just below the national average. This will be a key region for Mehmet Oz as he battles to keep the Keystone State’s lone Republican seat against Democratic Lt. Governor John Fetterman; while the C.P.I. increase there may be below the national average, it will likely remain a factor in the minds of voters.

Increases in the CPI remind voters of the lack of effective action by President Biden and Congressional Democrats to stem the inflation that their spending created. In this final stretch of the 2022 Midterms, Republicans must concentrate the national discussion on this issue. Families across the nation—and especially in battleground states and key metropolitan areas—are facing difficult decisions every day, balancing their checkbook and buying essentials. Voters must be reminded which party bears the responsibility for the inflation that’s roaring through the nation’s economy.