A recent study from FiveThirtyEight.com finds that bipartisanship in the Senate is slipping more and more, as moderation fades and partisan and personal agendas take front and center. The largest change has occurred in the last 20 years, as the eras of social and mass media helped bring about the nationalization of our politics. The Senate’s partisan makeup is evenly split now between liberals and conservatives, as the regions from which Senators hale are increasingly less diverse. 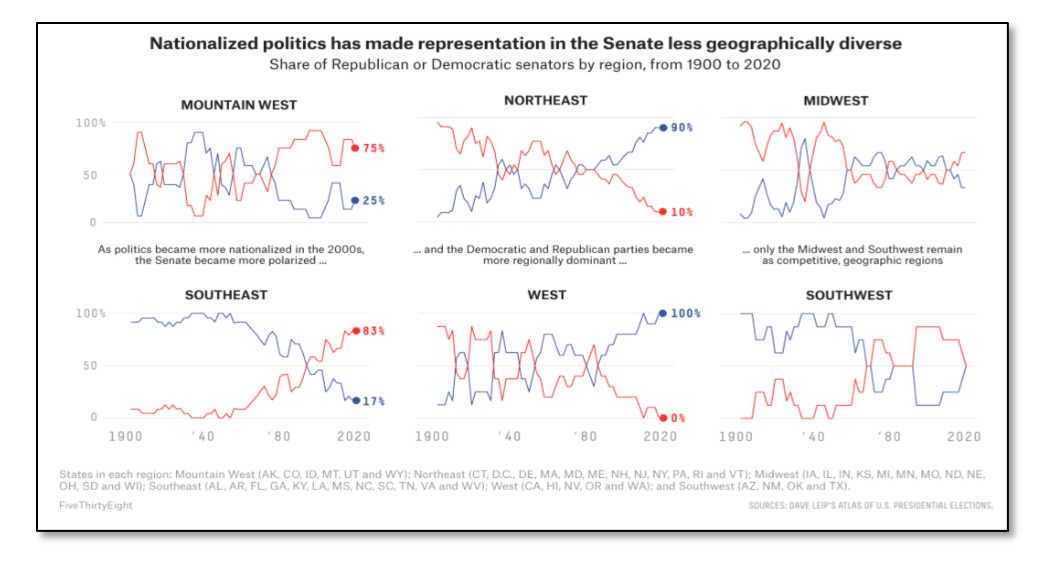 The change is most obvious in the Northeast and Far Western United States, where diversity of representation is all but gone, replaced by vast majority Democratic representation. Similarly, Republicans have to a lesser extent carved out their own regional spheres of influence in the Mountain West, Plains and Southeast and South Central. Geographically, the truest battlegrounds remaining are in the Southwest and Midwest.

What drove this change? In part, credit the massive out-of-state investments from partisans in rock solid Democratic or Republican areas they poured into battleground regions. The sum of donations to the top ten recipients of out-of-state contributions among Senators in 2020 was $449,569,627. This reflected a dramatic increase in out-of-state spending in these races, demonstrating the level to which Senate campaigns have been nationalized- a grim warning for the future.

This nationalization of Senate races has diminished the effectiveness of bipartisan messaging and local issue-based campaigning. In the 2020 election, Republicans lost seats in the Senate, but gained a lot of ground at the state and local level. As we move into the 2022 Midterms, it is worth baring in mind Republican have a great chance to win back the House and Senate.  The more local a race’s narrative, the more positive outcomes will be for both voters and candidates.